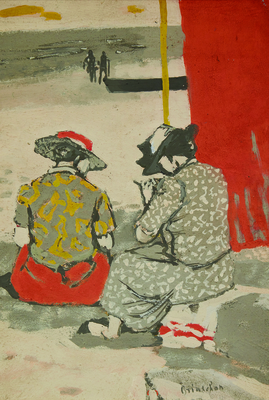 "Mirrors of Midcentury French Culture" is an interdisciplinary exhibition featuring the painters, Marguerite Louppe and Maurice Brianchon, a married couple that were part of the rich fabric of the Parisian art and cultural scene in the early to mid 1900’s. Brianchon was a canonical figure in the Parisian art scene, having exhibited with Édouard Manet, Pierre Bonnard, Georges Rouault, Georges Braques and Pierre Denis. Louppe was equally accomplished as a painter, but received less critical attention than Brianchon, like most women during this period. Before Brianchon’s meteoric rise, the couple frequently exhibited together. Their circle included other artists, as well as other preeminent thinkers from the worlds of literature, theatre and politics.