The World In Black And White 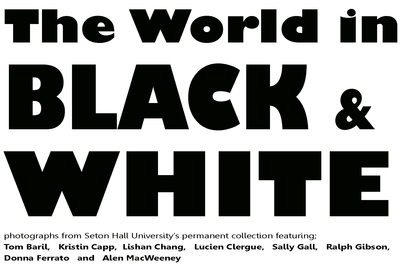 The World in Black and White

The Walsh Gallery's collection of modern and contemporary photography includes exceptional holdings of work made during the 20th and 21st centuries. Of particular distinction in the collection of prints by American photographer Ralph Gibson - best known for his photographic books and nudes, noted French photographer Lucien Clergue who documented bullfighters and Romani people, and Tom Baril whose meticulous studies of architecture, seascapes and botanical subjects include a variety of photographic means including wet-plate photography and pinhole Polaroid cameras.

Although Seton Hall University was founded in 1856, it was not until the 1990's, when the Walsh Gallery opened its doors that the university began to actively collect photographs. The collection is particularly rich with depictions of people and places throughout the earth, coinciding with Seton Hall University's emphasis on global education. Other themes evinced in the collection include social activism, cultural heritage sites and portraiture. Committed to collecting the work of significant photographers, we proudly present this exhibition of photographs from the university's collection. Together, these black and white photographic prints take viewers on a journey around the earth to locales in Brazil, Ireland, Cambodia, France, Italy, Egypt, Spain, Thailand, Bali, Burma and the United States. The World in Black and White celebrates the diversity of people and their life experiences throughout the planet.