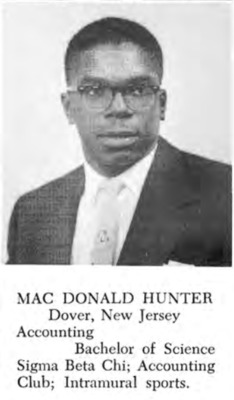 Mac D. Hunter (1934-2017) enrolled in Seton Hall Law in 1956 after obtaining his B.S. in accounting from Rider College (now Rider University). While attending law school at night, he worked during the day as an auditory for the state of NJ. He graduated Seton Hall Law in 1963. In 1992, Judge Hunter became the first judge in NJ, and the first black person in the United States to hold this degree.

Judge Hunter began his legal career in 1967 as a New Jersey Deputy Attorney General, a position he occupied until 1969. After which he briefly served as assistant director of the New Jersey state Civil Rights Division. In 1967 Judge Hunter was appointed adjunct assistant professor of business law at the Rider College Evening School where he taught until 1977.

Mac D. Hunter was first appointed a one-year term as Assistant Judge of the Plainfield Municipal Court in February 1976. He was later appointed Union County Superior Court judge in 1986 by Governor Thomas Kean. He was tenured in 1993 under Governor Florio.

Judge Hunter served on the State Supreme Court District Ethics Committee for Union County from 1977-1984, and he served as the chairman of the committee from 1982-1983.

Judge Hunter was honored as Man of the Year by the Union County Club of the Negro Business and Professional Women's club in May 1976.

In 1999, Judge Hunter was inducted into the Dover High School Hall of Fame.

University of Nevada in Reno